A Bruichladdich Tasting with Jim McEwan

Since 2001 Bruichladdich tins have carried the tag line "Progressive Hebridean Distillers". The 'Laddie has built a reputation as a distillery willing to experiment - Octomore, Black Arts, and the quadruple distilled X4 come to mind - and certainly the packaging is very modern.

Bruichladdich (like many an Islay malt) has also acquired a fanatical following, at least in part because of the work that Head Distiller Jim McEwan has done over the last thirteen years. So when Glasgow's Whisky Club invited him to host a tasting, there was a rush to sign up - I've never seen so many club members gathered in one place before. 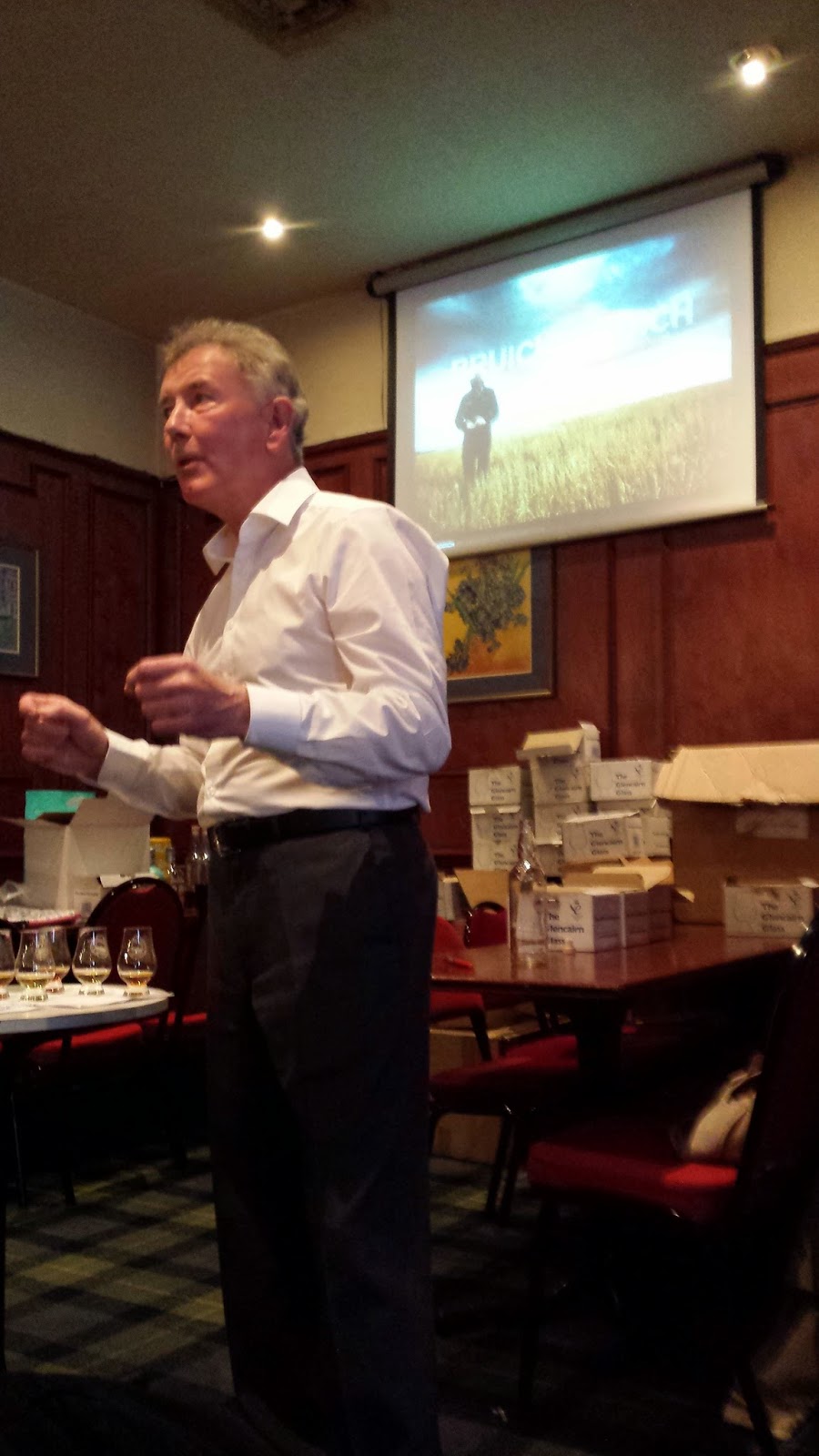 Mr McEwan is a compelling and passionate speaker, and we were treated to a fiery defense of the Way of the Laddie, along with some great anecdotes of how distilleries worked in the 1960s. And of course, some very fine whiskies.

The first three were from the latest iteration of the Bruichladdich range. Bruichladdich Classic is a no age statement malt bottled at 50%, which replaces the Laddie Classic 10 Year Old (which was bottled at 46% and cost rather less). It has the pure, clean, malty character which, along with the lactic or sour note, defines Bruichladdich. Sadly, the new Classic isn't as elegant as the Ten. It's a fine dram, but the quality has dropped a notch. Here's hoping the distillery can manage to build up stocks to the point where the Ten can be reintroduced.

Bruichladdich Islay Barley 2007 is one of the products which justifies the "Progressive" tag. I wish more producers were exploring this kind of ultra local provenance, but at the moment there's just Bruichladdich, Kilchoman, and the not yet released Daftmill. Comparing it with the Classic, this whisky seems sweeter and creamier, and also more elegant. A very fine drop indeed.

The third "standard" was Port Charlotte. Again, no age statement (although peaty whiskies - for me anyway - seem to taste better at a young age). Really rather smoky, but also very very fruity, it still manages to show some of the Bruichladdich elegance.

The other three drams were (I think) cask samples. In the past you could be sure they would be released, but the latest Bruichladdich range is minimalist, so these may never be commercialised.

A 22 year old which has spent four years in a Haut Brion cask was my dram of the night. I have a real weakness for wine cask flavours, and this had everything I love. Elegance, vinosity, fruit (strawberry jam on buttered toast into raspberry balsamic vinegar), a slightly dirty note (faint struck match, plus very faint mushroom), it was truly complex. Superb whisky.

A 28 year old from an Oloroso butt was perhaps not the best example of Bruichladdich character, but it was an outstanding example of sherry cask character. Rounded, sweet (but with big drying, grippy oak spice in the finish), nutty, treacle-y, I really enjoyed it. On reflection, there was some 'Laddie character to be found, in the balance and elegance of the finish. Another superb whisky.

We finished with some 2008 Octomore from a virgin oak cask. Of all the Octomore releases, I've only ever really enjoyed the Comus, which had some sweet wine cask influence. My first taste of this left my palate anaesthetised (64.7% ABV you see), but once I got over that the combination of ultra-peat and ultra-oak resolved into a rather tasty barbeque sauce effect. I'd still call Octomore a concept whisky rather than a drinker's dram, but this one was better than most.

At the end of his presentation Mr McEwan got us all to stand on our chairs with a foot on the table, so that we could toast each other properly (that is, by roaring at each other in Gaelic). All tastings should finish thus. A very fine evening. Here's hoping that 22 Year Old Haut Brion cask gets bottled sometime soon...
Posted by rodbod at 10:59 pm