I'm currently working my way through four dozen gin samples for the World Drinks Awards, a process which was delayed by an absolute stinker of a cold (necessitating a rather busier than anticipated weekend ahead). 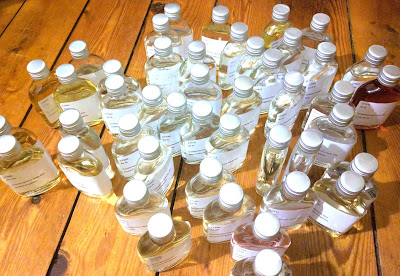 Oddly, and despite the name being a bit of a clue as to what the drink should taste like, some of these gins need more juniper.

Or perhaps it's not odd. Perhaps, in the current crowded market of new gins, some poor sods have decided that their USP is going to be Lack Of Juniper. Who knows?

Incidentally, I reckon we have just hit Peak Gin. How do I know this? Well, on the Archers, Toby Fairbrother is trying his hand (and failing) at gin distilling.
Posted by rodbod at 2:13 am No comments: 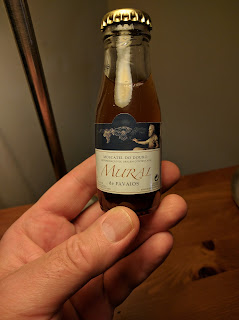 Conclusion: It's very simple, but it's also rather direct and to the point, the point being a strong wee sweetie. I sort of wish I'd bought two...
Posted by rodbod at 5:39 am No comments: 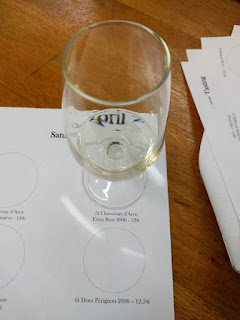 Palate: there is some evolution, but it still feels pretty fresh. Very tangy and tart. Real yellow fruit character, along with a light body.

Conclusion: this is a lovely wine, and distinctively different - I've never encountered that pineapple note in any other champagne. And, as with many wines from the Côte de Bar, it's very good value for money.

Champagne Grapes
Three grape varieties, Pinot Noir, Pinot Meunier, and Chardonnay, account for nearly all of the production in Champagne, but (of course!) things are a little more complicated than that.

Besides the more than 30,000 hectares devoted to the big three, there are a few hectares (less than a hundred, I believe) given over to Pinot Blanc, Pinot Gris, Arbane, and Petit Meslier. Producers such as Drappier, Moutard, and Chassenay d'Arce turn out small quantities of these unusual wines, but they are not easy to find.

And for the truly pedantic among us, the Champagne appellation law of 1919 can be read as meaning that all members of the Pinot family may be used for Champagne, which seems to me like the perfect excuse for some bolshie Brit to go over there and make fizz using Viognier and Aligoté.

Posted by rodbod at 8:00 pm No comments:

A Visit to Westons 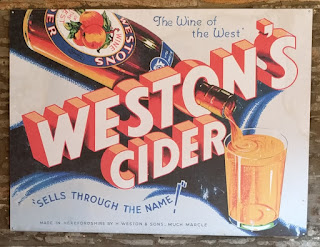 After spending an intense day and a half helping my very good friends at Little Pomona bottle up a batch of their cider, it was instructive to go and see Westons at Much Marcle, who are most decidedly at the other end of the spectrum, both in size and in their practice.

The site is visible from quite a distance, thanks to the dozens of vast storage tanks which give it something of the air of an oil refinery. These 200,000 litre tanks hold the pressed, sterile filtered juice so that Westons can ferment and produce all year round. 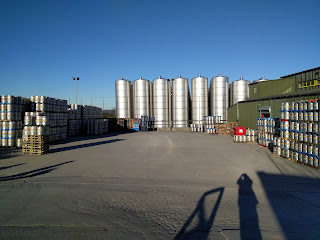 The tour is an interesting mixture. It begins in the older buildings dating from perhaps a century ago, and the emphasis is on traditional production methods; there's even a stone mill wheel on display. But  then as we move through the production area we see, for example, a press as big as a house (granted, only a small holiday chalet, but I do literally mean a press as big as a house). And then again, a series of giant wooden tuns huddled together, somehow seeming to have a cathedral-like air to them. 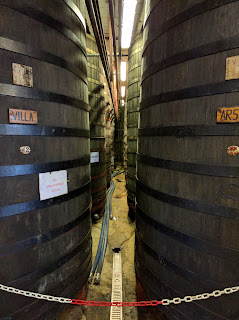 Westons are very proud of their modern production methods. All the apple juice they press is passed through a micro filter to remove any trace of yeast, and then stored in the giant spaceship booster tanks until it's needed for fermentation, thus allowing them to produce continually all year round.

The juice is then fermented to a strength of 11%, in the pictured wooden vats, after which it is blended to whatever strength is required.

It's a curious mixture of modern and traditional. Fermenting in wooden tuns, yet sterile filtering the juice. Much of what Westons produce is sweetened, but then many small craft producers also accept the market demand and sweeten some part of their output. And Westons do make some very good vintage, oak-aged cider.

As you can perhaps tell, I'm in two minds about Westons. I'd far rather have a funky single varietal cloudy cider from Tom Oliver or Ross-on-Wye, but on the other hand if they grew big enough to be available in Sainsbury's, the liquid would very likely not be as interesting.

I think the way to look at Westons is rather like Guinness or Lagavulin. They're all big, heavily marketed brands, but if you go into an otherwise uninspiring pub and see them, then you know you've got something decent to drink. Perhaps not amazing, but good enough.
Posted by rodbod at 9:54 pm No comments: