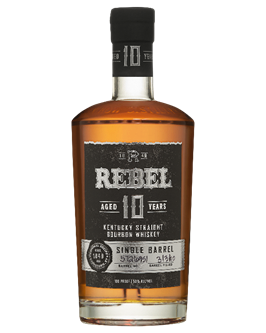 This post is part of a flash blog / mass blog / blog mob / flash mob organised by Steve Rush of the Whisky Wire, who kindly organised for samples to be sent out to the mob / the mass / the flashers (ok sorry I'll stop now).

It's part of range that includes whiskeys bottled without age statements, but presumably much closer to the four year mark that designates a Straight Bourbon. What with Kentucky being relatively hot and dry, spirits matured there come along much faster than they would in Scotland and releases with double digit ages are very much in the minority.

On top of that, this is an annual Single Barrel release, which means that, although the corn, wheat and malt mashbill are the same as last year's, and the process is the same, there will be subtle differences from year to year.

I have tasted some of the Rebel range before, so I consulted my notes, and hence what I'm describing now is very much in comparison with the 'standard' releases.

The nose is loud and proud Bourbon -  caramel, oak spice, sweetness, and I can see the family resemblance. 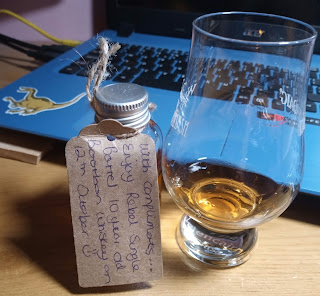 But the palate - Boom! - is much bigger and more punchy. It starts with a bold broad new oak spiciness. The spiciness builds (yes I did go and double check there isn't any Rye in the mashbill. It's that spicy) in the mid palate, along with a mouthcoating toffee sweetness, then the finish returns to fresh white oak.drying. new oak dryness.

The second taste is sweet and spicy (more sweetness than the first), with crème brûlée and cinder toffee. After a while I'm finding what seems like a grilled orange peel note, or perhaps orange oil that has been expressed onto grilled peaches - whatever it is, it's deliciously fruity.

In conclusion, this is an amped up version of the Rebel that places the oak front and centre and givs you something to chew on. A dram to contemplate and sip at your leisure.