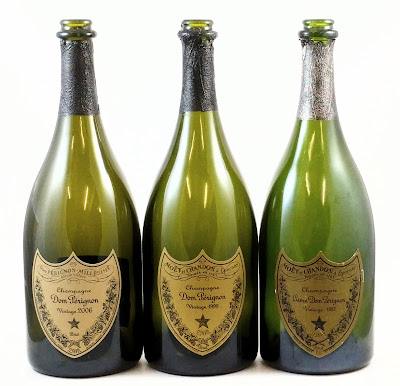 One of the many benefits of working in the booze industry is the quality of the drinks on a staff night out. Our latest expedition began by setting a fairly high bar, with a mini Dom Pom vertical, of the 2006, 1999, and 1982.

(It's interesting to note, by the way, that Dom Pérignon these days doesn't mention Moët et Chandon on the label - perhaps they feel it makes the brand seem more exclusive?)

The 2006, in its first plénitude, was big and bold: fresh icing sugar, sharp floral aromas, but also with a touch of mushroom. The palate was soft, sherbety, with lemon notes and a beautiful rounded flowery character. The finish was noticeably drier than on the other two wines.

The 1999—not a stellar year, but, by my calculation and triangulation based on what the DP website says, in its second plénitude—wasn't any better (in the hedonic sense) than the 2006. Indeed, I think I enjoyed it a notch less. But the flavours were quite different. The nose was both spicy and mineral laden. After a while a floral component rather like that in the 2006 appeared. The palate was intensely mineralic, tangy and grapefruity. It was also richly floral—roses I think—with the richness extending to ripe fruit.

The 34 year old wine, almost but not quite flat and a deep, deep gold, was something else. Well into its third plénitude, this was a glorious glass of fizz. The nose had some of the floral elements present in the 2006 and 1999, but ah!, the rest of it. Runny honey on toast, sweet roasted almonds, buttery caramel, and a shining warmth. Liquid sunshine indeed. The palate showed the slightest spritz, and a fair bit of oxidation (good oxidation, like Madeira), despite which there was still a very decent level of acidity. The flavours were all sorts of fruit: juicy and fresh berries, raisins, figs, lemons. Just delightful.

The Dom Pérignon 1982 wasn't the oldest wine we tasted tonight, but for me it was far and away the finest. I'm usually more of a Billecart fanboy, but if all DP was this good...
Posted by rodbod at 10:10 pm No comments: