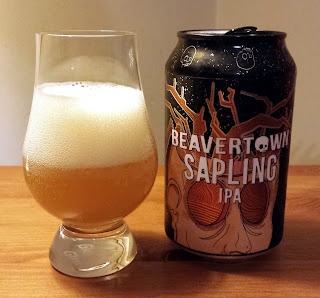 On the one hand: oh dear, another Beavertown special. If only I still used ratebeer I could look it up and see what it is. Nice graphics tho.

Cracking open the can I can smell the smell that means lots of bitter hops - but what is it? Resinous? Green? Dank? (However nebulous a descriptor that last one is)

So. It's not particularly fruity. Perhaps some yellow citrus notes. Not too tart. There's a fresh white wood thing. A peeled stick maybe? Or is that just me channelling the cool label?

There is a smell I can only describe as bitter. Clearly, this ain't a smell according to the current model of human olfaction, so I must be smelling some hard to verbalise aroma which I generally associated with bittering hops.

Pouring out the last of the can I'm sooking (or "huffing", if you like) the very final dregs trapped behind the lip of the opening. As always, this creates a fine aerosol or mist of what is—at least in this sort of beer—the very essence of the bitterness.

If you haven't done this before you really should (but go and get a properly hoppy can to do it with). It highlights a particular aspect of the beer in a way you don't otherwise experience. As when rubbing heavily peated malt whisky onto your hands to find the cereal behind the peat, or misting your tongue with brandy from an atomiser spray, it's good to explore flavour from odd angles occasionally.

In the particular case of Sapling, the huff reveals a powerfully bitter dry earthy sandiness behind which there is sweet yellow fruit juice, although not orange. Perhaps it's one of those odd mixtures of banana, apple, and a token gesture's worth of pineapple. I think I mean 'smoothie'.

I'm still not getting very close to what the bitter-associated smell is. Let's just leave it at "bitter" and ask the smell scientists to revamp their model to fit.

The taste is satisfyingly dry. There is a juiciness and a persistent bitter hoppiness which dries things out nicely.

This is a very, very fine beer, and especially in its 65 IBUs - the best kind of bitter.

I have but two complaints. The first is that 330ml is not quite enough, even at a strength of 7.1%. 500ml would perhaps be excessive, but 440 is a pleasant number. The second is that the ABV is entirely deceptive. Only in the thick texture is there any indication that the alcohol is higher than normal.

In conclusion, well done to Beavertown, good work. And, by way of a post script, it occurred to me some time after I'd written my notes on this beer that maybe the name is quite apt, since it reminds me of peeled green sticks. Or perhaps not.

Posted by rodbod at 1:38 pm No comments:

My first thought is that the tannins are beautiful. Present, prominent, yet in no way abrasive. They curl round your tongue and in behind your teeth like a cat settling on your shoulders; it's lovely but if it it weren't lovely the cat wouldn't care and would still do it. Purring, rounded, but irresistible.

Then there's a metallic, earthy note, which isn't quite iron. Is this bottling perhaps slightly less clean than other Little Pomonas? After all, relinquishing control of the maturation of a cider to an oak barrel, however carefully sourced, however thoroughly the bunghole has been sniffed, is always something of a risk.

Peach pits. And a rather pleasant acidity.

They're definitely mineralic, these tannins. Almost blue steel (as when one has made steel tough by heating it, perhaps by drilling it at too high a speed or without lubricants).

It seems to me tonight that of all the Little Pomonas this is the one where tannic structure is most important.

From memory I think I can dismiss The Rainbow and The Unicorn as flighty creatures of fruit.

The Old Man and the Bee had a ripe richness which dominated other aspects of its character. Feat of Clay was brighter and sunnier - youthful choirboys beautifully chanting psalms rather than the Mongolian throat songs of Bonbonne.

If this were wine I'd call these tannins chalky. Can I do that with cider?

It's too full bodied to compare with Chablis, and there are these compelling tannins. But the blue steel.

It stays with you. The tannins don't want to leave. Like Secret Service agents, inexorably polite, Ma'am-ing to left and right and not moving no matter what you say.

Behind all that tannic action, there's something which might be fruit cake or dried apricots.

Here, tonight, this is the best cider I've yet tasted from Little Pomona, and I think it's a strong contender for my cider of the year. You should seek it out and try it.

(Now, quite clearly I'm not in any way impartial. The owners and makers of Little Pomona are very dear friends of mine, and I've helped out at every harvest since 2014. But that aside, I do think this is an exceptional bottle of cider)

Boring technical stuff: C'est Si Bon-Bonne is a dry, still cider from Herefordshire. It's made mainly from Dabinett, along with Harry Masters Jersey, Ellis Bitter, and Foxwhelp (I helped pick and press these last two). It was a wild ferment in an ex bourbon barrel, left for six months then racked into glass bonbonnes and aged without oxygen for a year.

You can read more about Little Pomona here.

Posted by rodbod at 4:58 pm No comments: