Many years ago I worked in a caff. A moderately greasy spoon, where the chicken in a basket was deep frozen (and occasionally, still deep frozen when it reached the table). One of the weekly jobs was to swap over the five litre keg of cola syrup attached to the soft drinks dispenser, replacing the empty with a new, full one. That this was a once a week job will give you some idea of how concentrated said syrup was.

Smelling this dense liquid, it being the treacly quintessence of Coke, it was evident even to my naïve palate that an important aspect of cola is its citrus aspect. And yet even today I have to consciously look for that lime-y side of a glass of cola when it is delivered at the diluted, drinking strength.

None of the foregoing really has much to do with bourbon, except in two important points.

1) I nosed my glass of Yellowstone Select and smelled lime-y cola, and fell back through four decades to a time when I had only ever drunk Bells, or Grouse, or perhaps a stolen nip of Macallan Ten at Christmas time. When the height of sophistication would be to mix apple juice with Jack Daniels and call it Applejack.

Now, in my current job I taste a lot of liquids, in  many different categories. Whilst this is undeniably a lot of fun, it doesn't often provoke that kind of jaunt down memory lane. Whilst it's hardly a petite madeleine, this is definitely plus one to Yellowstone.

2) When I've finished with my tasting note for this glass of whiskey I'm going to take the rest of the sample of Yellowstone and mix it with Coke(1) and see where it takes me. I have high hopes.

So. Enough of the throat clearing and meandering preliminaries (as if this were some sort of recipe blog!)

This post is part of the flash blog organised by the Whisky Wire to taste and describe Yellowstone Select, a straight bourbon produced at the Limestone Branch distillery.

Yellowstone is a blend of four and seven year old straight bourbons, which is a decent age by American standards, if less impressive seeming in Scotland.

(Perhaps there ought to be something like dog years for whisk(e)y which isn't matured in a cold climate. Perhaps I should be looking at this and thinking, "ok, so a solid fifteen years maturation - in Kentucky years".)

On the nose there's the already mentioned citrus/lime aspect. Which, for me, shades rapidly into the plentiful coconut of Quercus Alba. It also promises sweetness. I can see a kind of icing sugar thing too.

Hah! The palate is much less sweet than I expected. Yes, there's a sweet fruit-syrup attack, but that very quickly gives way to dry, oaky spice, with menthol and cedar notes.

My initial conclusion is that this is a mixing bourbon. That dry spicy finish is crying out for a modifier or two.

And so on to the mini-Manhattan, which involves careful use of teaspoons and one small ice cube. (oh yes, and Cocchi and Regan's)

This. Is. Delicious. Lovely vibrant coconut vibes, icing sugar and Christmas spices. The Regan's orange bitters chimes(2) in alongside the whiskey, and the strong vanilla of the vermouth tempers the drying oak finish.

And so my final conclusion—at least until I do the Yellowstone / Cola thing—is that this is a very good mixing bourbon, especially if you have a sweet tooth. 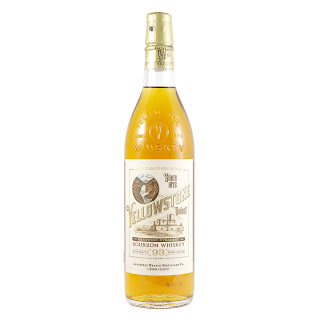 (2) Or should that be, "chime"? I really can't decide, but I wouldn't want you to think I hadn't considered both options.

Posted by rodbod at 1:23 am No comments: