Cider With Honeysuckle (and no Indole)

I'm working through all the episodes of the Neutral Cider Hotel podcast. In the one I listened to last night, No Quilt For You, Queenie, James from Little Pomona talked about an aroma that I've encountered in a different context this week. It seems that the planets were aligned last night, for I recently shared a magnum of the very cider he mentioned, and there is honeysuckle in the garden, and I had to hand a preview sample of the next vintage.
It took me a little while to get into the Neutral Cider Hotel. It's a very relaxed four way chat (plus guests), but, as is often the case with podcasts (probably due to the huge success of My Favourite Murder), there are an awful lot of in jokes, and incoherent wheezy laughter at said jokes. As the Hoteliers frequently say, they want the podcast to feel like talking to your mates in the pub. In any case, I'm now at the stage where I'm sitting at the next table over, sipping a glass of something from the Three Counties, and enjoying the blether. If you have an interest in cider you should go check it out. (Or go check in. Or listen to it. One of those.)
Old Man and the Bee is a cider Little Pomona have made for four vintages now. It uses fruit from their home orchard, and mostly avoids oak. It's an attempt to express as purely as possible the year and the place. 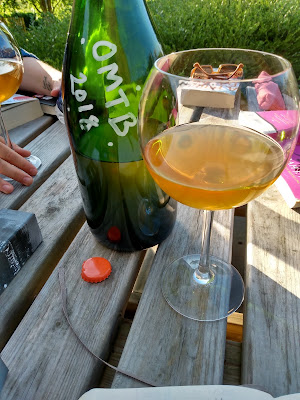 (That's a magnum I was very kindly given by James. No label, but, you know, gift horse / mouth, yeah?)
My first impression is of plumpness, a soft, rounded ripeness. There is indeed a creamy florality which is honeysuckle adjacent. It's close to the creaminess of honey on buttered toast, which I think is perhaps why Martin on the podcast was reminded of oak, as that's an aroma I occasionally find when a fruity spirit has been matured in an ex bourbon cask.
This is a dry cider, but it give a strong impression of sweetness, so ripe are the fruit flavours. Yellow apples, shading into nectarine, with honey and a soft woody note. The finish evolves some spice, rather like the clove aspect of humbugs.
I used the phrase honeysuckle adjacent because there's an aspect to honeysuckle which I'm certain would not be welcome in cider, and that's indole.
Indole is what makes shit smell of shit, but a tiny touch of it lends an animalic or musk note to perfumes. And it's found in honeysuckle.
I was lucky enough to experience this for the first time last month, on a humid evening after a blazing hot day. 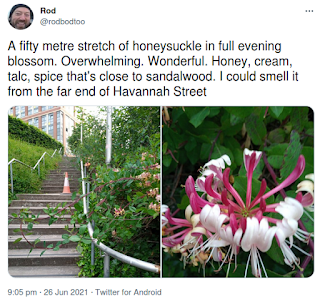 The previous day I'd tweeted my happiness at the huge spread of honeysuckle and someone with a deep knowledge of aroma replied to say I should look out for the Indole aspect of the flower. So I went back and had another long sniff and sure enough, what I'd thought was something dead and rotting in the bushes was in fact coming off the flowers. Indole.
The conclusion to—nay, the moral of—this story is of course that we should remember that all tasting notes are approximations, and partial ones at that. Old Man and the Bee has the sweet, creamy, rose-adjacent aspect of honeysuckle, but (thankfully) not the the indole. And the spice aspect of Old Man is nearer to clove than the sandalwood I find in honeysuckle.
I do believe that's why we end up with the kind of word salad being gently mocked by Fake Booze this week, as an honest attempt to capture every aspect of a tasty drink ends up being more like what happens when you mix all of the paints on your palette.
If you like the sound of Old Man and the Bee you can grab a bottle from the Little Pomona webshop here.
Posted by rodbod at 12:08 am No comments: