To Edinburgh for the opening session of Create:Eat:Whisky, which I'd been looking forward to ever since the anCnoc #LightOnDark event in March, because the food/whisky pairings at that event, by Jelly & Gin, were so very fine.

The venue was hidden behind a very unassuming frontage, through a wicket in a battered old yard entrance near the bottom of Leith Walk in Edinburgh. I stepped through into a dark, peat filled space, beyond which I could see smoke drifting from the dimly glowing interior.

Inside, the old Nestle factory had been equipped for fine dining, with linen table cloths and little wooden boxes containing canapés. 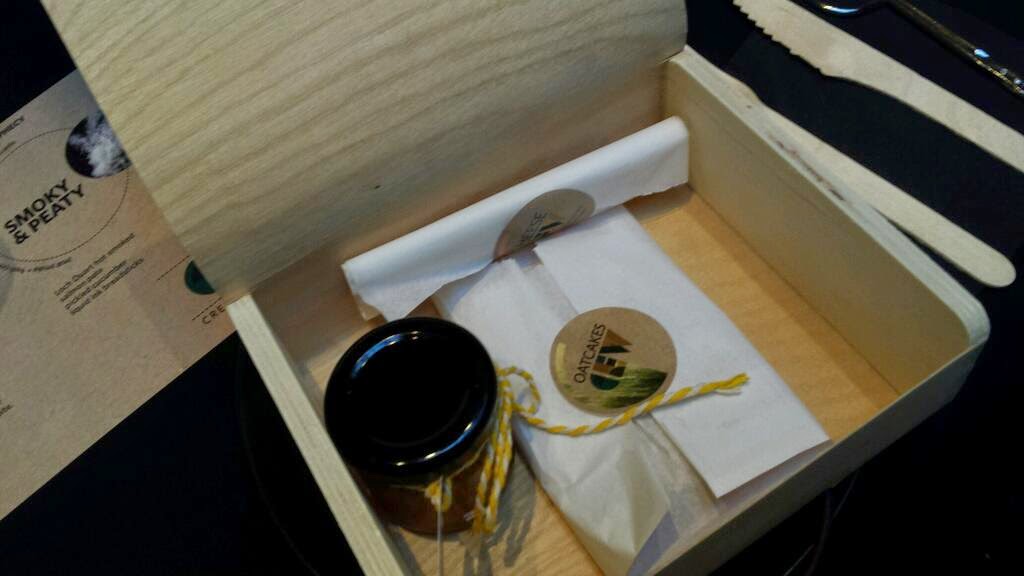 After a very atmospheric introductory video featuring, Wizard of Oz style, the disembodied voice of Richard Patterson doing his "Hello, How are you" schtick we tucked into said canapés, including some very fine Ayrshire Bonnet cheese, paired with Jura Elixir, a twelve year old expression. The whisky cheese combination really worked very well, especially in terms of texture (I think because Jura is a soft/mild whisky), and the fruit flavours in the pineapple chutney definitely enhanced the malt.

Jura, to me, is a decent malt, but not more than that. It's soft and easy going, and seems to suit palates not used to whisky. Perhaps this softness makes it easier to match to food. Or perhaps Jelly and Gin are geniuses. There were some outstanding flavours going on here.

Next was a wholly carnivorous serving, which looked ace but did not pass my lips. The whisky was Jura Prophecy, the heavily peated one. This is a super sweet toffee-ish dram with a goodly hit of mellow rounded smoke. Decent enough. Prophecy always reminds me that Jura likes to position itself as the whisky for every occasion. Every bottle of Jura has a kind of flavour wheel printed on the box with - would you believe it! - a Jura in every quadrant.

Third up was Origin with a pear compote. This was just delicious. The texture was right, the cooked pear brought out a similar note in the whisky, the cream I could have eaten by itself. Never before has Jura 10 Year Old tasted so good.

We finished with the Diurach's Own (a 16 Year Old) and some artisanal chocolates, which I didn't eat, preferring to take them home as tiny bribes for my family. However, I do know from other tastings I've done that Jura is the right kind of whisky for chocolates - if it were woodier the oak would seem bitter, and it's sweet enough too.

An aside: Jura emphasise (on this page) that the Diurach's Own is matured in ex Amoroso Oloroso sherry barrels. But that's just cheap Oloroso which has been sweetened, which is perhaps not the greatest recommendation.

The music (see below), subtle lighting, and props never intruded on the organoleptic experience, and the food pairings definitely made Jura taste much more interesting than it normally does. Well done to Jelly & Gin.